Once Upon A Beehive 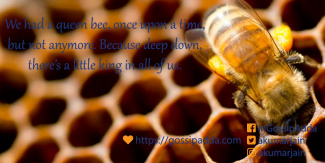 Once upon a time, there was a giant beehive. It was located on an ancient tree, situated amidst meadows and gardens filled with bright and colorful flowers.

The beehive had a queen bee, who along with some senior bees, had been chosen to run the hive. Collectively, the elected were called the Government. Worker bees entrusted the Government bees to store their honey and keep them safe. The Government also had to discover new gardens, to provide new sources of flowers and nectar for the new generation of baby bees.

To ensure stability and avoid chaos, the Government bees made rules and passed laws. The worker bees had to follow them, else they could be punished. This was particularly important because the beehive had different kinds of bees, who could end up fighting with each other. The black bees and the brown bees for instance, were the two main kinds. They essentially did the same work. However, they had slightly different looks and practiced their own prayer habits.

In good times, it was the perfect beehive. Over time, however, things changed. Government bees had their own kids, relatives, and friends. Most could not join the Government. They had to become worker bees like everyone else. However, one day, a senior Government bee’s son told his father being a worker bee was too much work. “Why not let me take a bit of honey from our reserves?” he said to his father. “But that would be wrong,” the father bee said.

And then it started. Slowly, all Government bees’ children, cousins, relatives, friends, and well-wishers started stealing a bit of honey everyday from the reserves. They didn’t have to slave in the gardens all day anymore. The worker bees did notice the honey levels were not going up as expected. When some worker bees pointed this out, the Government just ordered everyone “to work harder and not be lazy”.

The worker bees worked harder to make more honey. However, honey levels refused to rise. In fact, they started to fall.

Over time, not only did honey levels fall, the discovery of new gardens stopped for the kids of worker bees. They remained idle and hungry. Sometimes, the queen bee tossed some scraps at the worker bees, and everyone praised the queen. However, the scraps were not enough.

Hungry and tired, the black and brown bees were filled with anger. They fought with each other. The Government bees enjoyed the distraction and continued to steal. As brown and black bees died and suffered, the Government tossed some more honey scraps. Worker bees praised the queen again.

Soon, there was a drought. The flowers became few, and it was time to turn to the honey reserved over all these years. However, to everyone’s shock, there was no honey in the reserves at all. Worker bees, normally trusting of the Government, went to check in the Government bees’ and their relatives’ homes. They found everyone fat and sitting on their own private reserves of honey. What’s more, they also found maps of hundreds of new gardens that were discovered but never shared with the worker bees.

Dismayed and shocked, the worker bees came back to their poor homes. The brown and black bees looked into each other’s eyes. They realised they had been fooled. They hugged each other and apologised for all the hurt they had caused each other.

“We will teach them a lesson,” the black and brown bees said in unison. The worker bees realised the time had come to use their sting, not against each other, but against those who had cheated them.

Meanwhile, the queen bee sensed the tension. She presented her beautiful young son, “He will save you now. Like I did all these years.”

However, the brown and black bees were too smart this time. They gathered together in a swarm and unleashed their stings on the Government and their fat cronies. The Government bees barely had any time to collect their belongings. They simply had to run away from the hive. Soon, they were all gone.

The brown and black bees decided to select their best people to be in charge. Also, they decided to never blindly trust, but monitor everyone. The hive recovered, and the new generation worked hard to restore the honey stores. New gardens led to new prosperity, and the beehive became the most successful beehive in the world.

A few years later, an old bee, talking to her grandson at night, said “Did you know we had a queen bee at one time?” “Yes. But we don’t anymore. Because deep down, there’s a little king in all of us,” replied the baby bee.